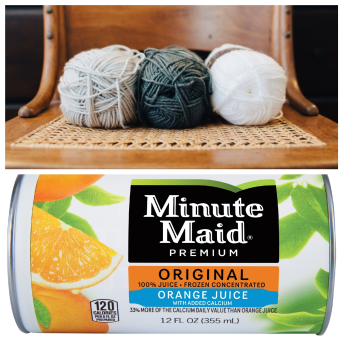 The Grace of the Father

“For of His fullness we have all received, and grace upon grace.” – John 1:16

I suppose every one of us as a child made some sort of craft while attending elementary school. When I was in kindergarten, my teacher Mrs. Diggs had all the students make a special gift for their dads. The craft project called for three things; an empty plastic orange juice cylinder (the kind that would usually contain frozen orange juice), various colors of yarn, and, like any good craft, Elmer’s Glue. We were to take the orange juice cylinder and lather the outside of it with glue. We were to then take the various colors of yarn and wrap the yarn around the cylinder starting from the bottom up to the top, creating a colorful tapestry. When finished, it was to serve as pen and pencil holder, a gift perfect for any dad. I followed my teacher’s instructions and diligently worked on the craft project, gluing a tapestry of red, orange and brown threads of yarn around my orange juice cylinder. When I finished my masterpiece, I proudly saw it as a work of art ready to be displayed in an art gallery. In my five-year old mind, it was something that any office supply store would want to sell. When I gave it to my father, he gladly received my gift with grace. He said, “Thank you, it is great” and he took it to work and placed it on his office desk. And, it would stay on his desk for many years. One day as a high school student, I was hanging out in my Dad’s office and saw my kindergarten craft. I picked it up and thoroughly examined it. For some reason, it was not as glorious as I had remembered it. It was actually quite crude and unattractive. The string pattern was uneven, somewhat drooping on one side, and there were globs of glue all over the edges. To be sure, my creation was not as good as I remembered it to be. What was even more overwhelming was the fact that my dad had kept it on his desk all those years. In that moment, I realized that the pen holder on my father’s desk said more about my gracious father than it did the pen holder.

There is much we can learn from this particular story from my childhood. To begin with, it is easy to have high regard for ourselves and our accomplishments when in reality we are flawed people who fall short. To be sure, there is a great dose of humility in my story. Secondly, when I gave the pen and pencil holder to my father, I really thought that it was good. But in reality, my father did not receive it because it was good, he received it because I was His child and He was a gracious father. And so it is with God. He receives our gifts, not so much because they are worthy of His attention, but because He is full of grace. The Father then receives our gifts, puts them on display and uses them for His glory.

In our verse above, John reminds his audience about the greatness of God’s grace; for God’s people have been bestowed with grace upon grace. This amount of grace heaped upon the children of God is immeasurable, and is firmly rooted in His gracious gift of His son Jesus Christ (Ephesians 1:6). Paul wrote to the believers in Rome and said “we are justified as a gift by His grace through the redemption which is in Christ Jesus” (Romans 3:24). Also, Paul also stressed that we are no longer under the law but grace (Romans 6:14). We can also find comfort in knowing that God’s grace is sufficient at all times (2 Corinthians 12:9). Furthermore, God even provides grace to His people for the purpose of Good works (2 Corinthians 9:8).

Dear child of God, there are many wonderful truths rooted in God’s grace! Bask in the rays of God’s grace (Numbers 6:25) and rest in His fatherly care for you. And like the pen holder, remember it’s not about you and it’s all about Him!