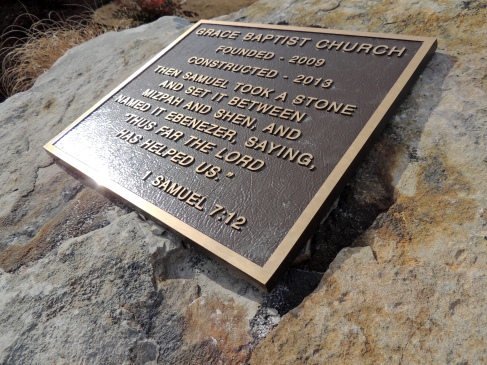 “Then Samuel took a stone and set it between Mizpah and Shen, and named it Ebenezer, saying, “Thus far the Lord has helped us.”  – 1 Samuel 7:12

In reading one of Charles Spurgeon’s devotionals, the Lord brought to my attention an otherwise overlooked passage of scripture. Snuggled in the crevices of the first book of Samuel is a hidden gem of truth and beauty, and it is our text above. At first glance, it does not seem too impressive, yet further examination reveals a reminder of God’s past provision along with the hope of God’s future grace. These two glorious promises shine forth in the two little words, “thus far.”  As we close the book on one year only to open the book of another, let us polish our minds on this precious nugget from the goldmine of God’s Word.

After the people of God had just been delivered from the Philistines, Samuel reminded them that the Lord had been with them “thus far.” God Jehovah had always been their help, and had faithfully demonstrated His loving provision. Through the various seasons of life, they had been gripped by the steady and helping hand of God. And in our passage, the stone Samuel took served as a memorial and reminder of God’s past provision. Charles Spurgeon, being the wordsmith that he was, wrote, “Just as we delight looking down a long avenue of trees that forms a lush, green temple, with its branching pillars and arches of leaves, we enjoy looking at the long aisles of the years of our life.” Oh how right Spurgeon is! Isn’t that our story? When we flip through the pages of our past, do we not see the fingerprints of God’s helping hand? Whether rest or turmoil, whether health or illness, whether ease or difficulty, whether rain or drought, whether riches or poverty, “thus far,” God has faithfully graced us with an indescribable help. That is why it is good for us to proclaim along with Samuel, “Thus far, the Lord has helped us.”

But then there is the second side to Samuel’s saying for us to treasure. “Thus far” carries a future message. When Samuel said “thus far,” he was expressing to the people of God that the journey was not over. Though they had been delivered from the hands of the Philistines, the journey was certainly not over. There was more to come. Samuel was looking back while looking ahead. Think about it for just a moment. No one ever says “thus far” if the journey is complete.  “Thus far” is only spoken in the midst of the journey. When have you said “thus far?” I am not sure at what point you said it, but I am sure you did not say it at some ending point. “Thus far” is never an ending; only an intermission. There is just something open-ended in these two little words. It is here once again that we find Spurgeon’s wisdom to be helpful. He says, “These words also point forward, for when someone marks a certain place, it means he is not yet at the end and there is some distance to travel.”  Undoubtedly, Spurgeon paints the mental picture of Samuel’s stone serving as a marker on the timeline of Israel’s journey. They so they looked back while they simultaneously looked ahead.  “Thus far” the Lord had been their help. And so we must see these precious words in the same light. “Thus far” means that there are more chapters to come in our life journey.  And whether they are chapters of rest or turmoil, chapters of health or illness, chapters of ease or difficulty, chapters of rain or drought, and even chapters of riches or poverty, you can rest in the future hope that God will continue to be your steady help, just as He has done so “thus far.”

So a new year is simply a stone placed upon the timeline of your life. It is a marker for the moment in which to proclaim just as our friend Samuel did that day after being delivered from the Philistines when he said, “Thus far the Lord has helped us.”  As we enter another year, take time out to reflect upon God’s past help, and treasure the future help that the Lord is sure to provide.

The picture above is a stone we placed in the front flowerbed of Grace Baptist Church, Pinson, TN.  during my time as their pastor.