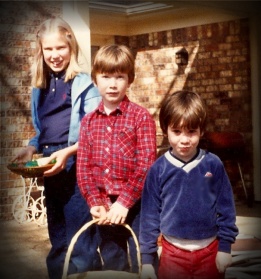 Broken Lamps, Dirty Chores, and the Glue of God’s Grace

“For all have sinned, and have fallen short of the glory of God” – Romans 3:23

I had a really good childhood. Some people do not have fond memories of their childhood, but I do.  I would not trade one single aspect of my childhood for anything in the world. In fact, sometimes I have even felt guilty for having such a great childhood. Other people cannot say the same, and for that, I hurt with them.

Now don’t misunderstand me; there were those moments that were not very enjoyable as they were happening, but looking back years later, I certainly learned a lot through those particular moments. For instance, I remember one summer my older brother Josh, my cousin Jennifer, and myself were “up to no good” and horsing around in the living room.  I really do not remember whose idea it was, but we started throwing couch pillows and playing indoor football.  (I suppose it is obvious at this point of the story my parents were not at home.)  One football play led to another, and the next thing we knew, a lamp fell and crashed into pieces on the floor.  It seemed as if the lamp hit the ground in slow motion.  You could see it happening, but there was nothing you could do about it!  There we stood, looking down at the broken fragments of a ceramic lamp that had been very precious to my step-mother. I believe the twenty minutes we had before my step-mother arrived home were the longest minutes of 1984!  You know, it’s funny; as hard as we tried, we could not hide the evidence. It’s hard to hide a broken lamp!  When my stepmother came home, we were found guilty as charged, and were ready for our sentencing.  For some reason, my cousin Jennifer really did not get in any trouble, but my brother and I did.  We found ourselves for the next few weeks doing odd jobs and chores around the house in an attempt to pay the price of that expensive lamp. Looking back, the trivial amount of chores that we actually did came nowhere close to equaling the value of the lamp or even paying the price for that lamp. My brother and I both did our share of chores. But when it was all said and done, my parents are the ones who really paid the price for the lamp.

What does my story have to do with our passage above?  Well when the apostle Paul wrote to the early church at Rome and said to the people that everyone has fallen short of God’s glory, it meant that no one on their own merit could meet up to God’s standard.  And Paul’s words two-thousand years ago apply to us as well.  The truth is, we all fall short of God’s standard. Why? Because God’s standard is perfection and the only one who meets that standard is His sinless Son, Jesus the Christ.  And so the only way that we can obtain forgiveness of our sin is through Jesus Christ, the one who paid the price for our sins; an act that you and I could not possibly do on our own. But unfortunately, some people attempt to obtain salvation and forgiveness of sin by what they do rather than what Jesus did. Just like my brother and I were attempting to pay the price of the lamp, they too are checking off their “to do” list and hoping for a salvation based upon works, attempting to pay the price for their sins.  But know this; no amount of good deeds can or ever will cover the high cost of sin.  You see, salvation and forgiveness are only available through Jesus the Christ. Why? Because He was the only one who could pay the price for your sins.  It would be wise for us to remember that it is not what we do, but rather what Jesus did that makes forgiveness possible. Because of our sin condition, we truly are broken lamps in need of the glue of God’s grace.  Aren’t you glad Jesus paid the price for your broken lamp?