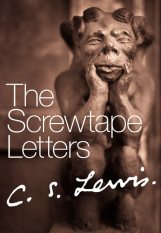 The Screwtape Letters by C.S. Lewis

C.S. Lewis’ The Screwtape Letters is treasured by many as one of the great works of Christian literature written within the twentieth century. Historically speaking, it is not a stretch to suggest that it is a book that has continually left its mark upon each generation of believers since it was penned over seventy years ago.

In The Screwtape Letters, Lewis addresses the realities of Hell, Satan, spiritual warfare, and demonic forces, and does so by using a very unique literary device; a device that undoubtedly leaves a lasting impression upon every reader. From the beginning, Lewis invites his audience to join him on a journey as he presents his own creative perspective on the diabolical inner workings of the underworld. Through the use of his creative literary style, C.S. Lewis effectively captures the realities of spiritual warfare upon the life of the Christian by writing The Screwtape Letters from the fictitious viewpoint of a demon named Screwtape. Screwtape writes a series of letters to his nephew named Wormwood, a demon of lesser rank. Even though these particular demons are simply characters playing out on the stage of Lewis’ imagination, they effectively help Christians grasp the reality of demonic activity and the evil tactics implemented by the enemy.

One of the first intriguing aspects of the book is the false affection expressed by Screwtape to his nephew Wormwood. Each letter penned by the “affectionate” uncle begins with the salutation of “My dear Wormwood.” Yet these are empty and deceitful words, for throughout the letter Screwtape chastises and criticizes Wormwood for his weaknesses and failures as a junior demon. But should we expect anything different?  Certainly we should not; for Screwtape’s constant accusatory attitude of Wormwood only mirrors the behavior of Satan, the ultimate accuser and the true father of lies.

Also, Lewis effectively depicts Satan’s subtleness. Many of the weapons used against the believing young man in the story are weapons that are very subtle in nature. Tactics that could easily fall under the radar of some unsuspecting, unguarded, and ill prepared believer are regularly suggested by Screwtape in an attempt to derail the young man in his spiritual pilgrimage and in his service to the Lord. Lewis effectively illustrates this reality to his audience by demonstrating that the Devil does not always use the obvious. The Enemy’s best laid plans are oftentimes the obscure. Furthermore, many of these subtleties are very paradoxical in nature. Lewis effectively illustrates throughout the book how something seen as a “positive” from the viewpoint of a human can be turned around and seen as a “positive” from the viewpoint of the demonic underworld.

Finally, The Screwtape Letters magnifies the truth about Satan, the ugliness of sin, and the veil of darkness spread across this lost dark and dying world. The entire book serves as a help to believers in understanding the seriousness of the daily battles they will face while still on this side of eternity.

Since my conversion to Christ over twenty years ago, I have heard many believers recommend C.S. Lewis’ The Screwtape Letters.  And the reoccurring theme within those conversations has been the reversed literary method adopted by Lewis. For me, it was certainly worth reading, and has immediately caused me to become more alert of the enemy’s influence upon my life. I only regret waiting all these years to finally read this Christian literary classic. I highly encourage every believer to add The Screwtape Letters to their personal library since every believer must face the realities of spiritual warfare and the demonic underworld.  To be more informed about the tactics of our adversary is to be better equipped in facing his relentless attacks. And the Word of God alone is sufficient to serve as our battle plan against the enemy and to reveal our enemy’s battle plans against us. The Screwtape Letters simply acts as an illustration to help us see the devil’s battle plans in color.